Juara kebangsaan wrestling
Anthony Robles of Arizona State University has only one leg, but that didn't stop him from becoming the national champion in his weight class. Born with one leg, Robles took the 125-pound title with a 7-1 win over defending champion Matt McDonough of Iowa. Robles' three-day performance earned him the Outstanding Wrestler award. He took control in the first period, jumping out to a 7-0 lead with a two-point takedown and two turns that exposed McDonough's shoulders to the mat for five more points. Robles uses his gripping power on those turns. “My tilting is due because I have such a strong grip, and that's because of my crutches,” he said. 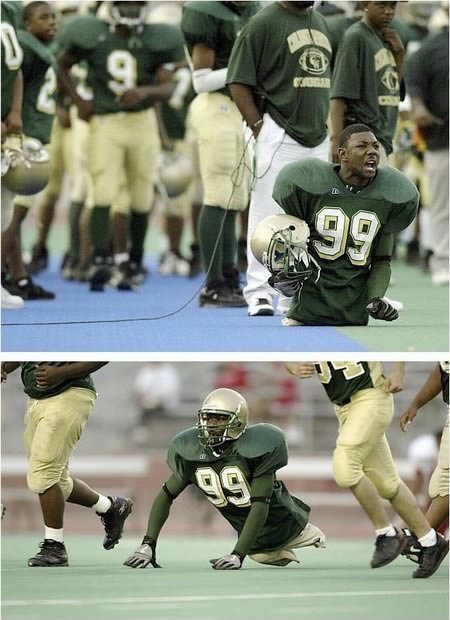 Pemain terbaik perlawanan
This is not Photoshop. This is Bobby Martin from Dayton Ohio. He was born with no legs and really does play football. He's also the homecoming King.

He campaigned hard for king. He placed ''Bobby Martin 4 Homecoming King" signs all over the school and gave a passionate speech at a rally that ended with him doing rapid-fire pushups that were more like handstands. At least one of his opponents apologized for running against him and even promised to vote for him. 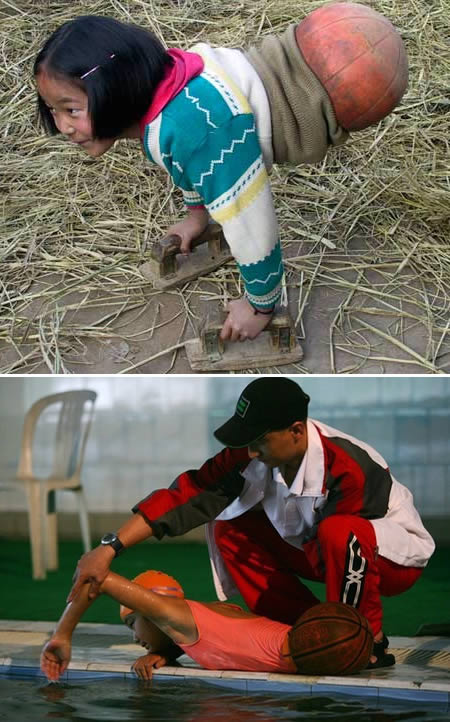 Budak menggunakan bola sebagai badannya
Qian Hongyan, who was forced to use half a basketball as her prosthetic body, inspired millions with her ambition to compete as a swimmer in the 2012 Paralympics in London. In 2000, Qian Hongyan, was injured tragically in a car accident when she was only 3 years old. To insure her survival, the doctors were forced to amputate her legs. Qian's family, living in Zhuangxia, China, was unable to afford modern prosthetics and instead used half a basketball to get around on. Once on the ball she uses two wooden props to help her move around. She struggled to live her life with a basketball as an underprop, 'walking' between school and home by herself. The girl's story is widely reported in the country, and drew the attention of the Ministry of Public Security and China Rehabilitation Research Center.

Qian now has a pair of proper prosthetic legs, but still says she likes to use the basketball from time to time as it is easier for her to get in and out of the pool. 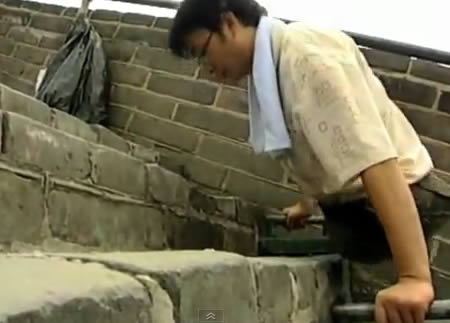 Memanjat Tembok besar China
A man who lost his legs in a train accident climbed the Great Wall of China in 2006. Huang Jianming from China's southern city of Shenzhen had both legs amputated in 1994, after he fell out of a speeding train carriage. Measuring 85 centimeters in height and weighing 39 kilograms, Huang calls himself a "half man," since he has become half the size of an average person due to his accident. He climbed the Great Wall for two hours by using the sheer strength of his arms, pushing himself up the cobblestoned steps in front of hundreds of bemused tourists.

The accident totally changed Huang's life. Without legs, his wife deserted him when he lost his livelihood, but the man from China's Sichuan province remained determined to live a normal life. He began practicing calligraphy and became a traveling street artist, roving through more than 20 Chinese cities in ten years.

"I hope when these tourists see me, a half man, climbing the Great Wall and enjoying being a real man, they will think about themselves." 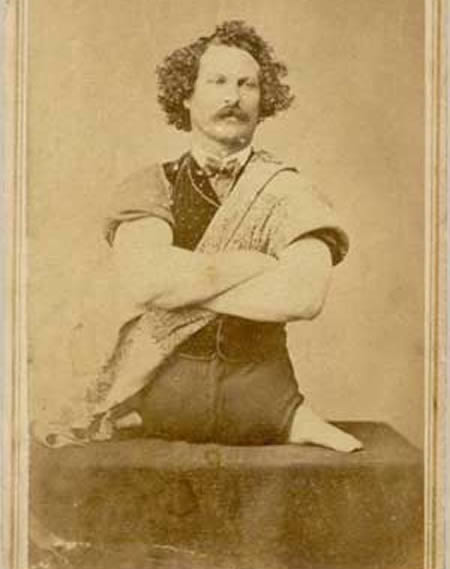 Menjadi juara gimnasrik
The remarkable Eli Bowen was born in Ohio on October 14, 1844 as one of ten children. While his siblings were physically average, Eli was born with his disproportional feet attached directly to his pelvis. In essence, Eli Bowen was a man born with feet but no legs.

Despite his physical configuration, or perhaps because of it, Eli strived to live an extraordinary life. He wanted to be an acrobat. Eli learned early to use his arms and hands to compensate for his lack of legs. Eli would hold thick, wooden blocks in his palms and use them as ‘shoes', elevating his torso in order to walk on his hands. As a result of that process as well as steady farm labour Bowen developed enormous strength and even in adulthood he was able to navigate his 140 pound frame anywhere he chose. He started his professional career at the age of 13 in various wagon shows before eventually touring independently, performing in dime museums and finally touring Europe with Barnum and Bailey Circus. He garnered a reputation for being a magnificent and effortless tumbler and acrobat and for his phenomenal feats of strength. 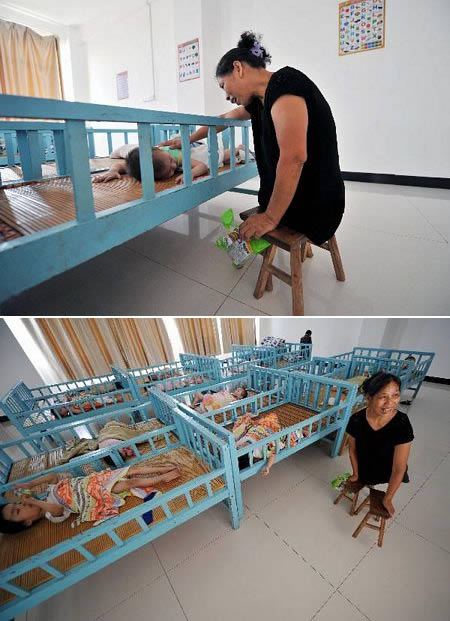 Penjaga kepada 130 orang kanak-kanak
55-year-old Xu Yuehua, who lost her legs in a train accident at the age of 13, has spent 37 years raising children in a social welfare institute. She has brought up more than 130 children. She moves without legs by using stools; she spends her days on a pair of small stools, so the children call her “Stool Mama”. Stool Mama feels happy to take care of these children and doesn't regret doing it. Xu Yuehua, orphaned at an early age, devotes herself to raise the children at Xiangtan Social Welfare House, Xiangtan, where she shelters them. It is also the same place that helped her through her difficulties. 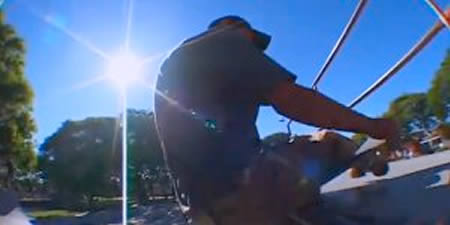 Pemain Skateboard
Italo Romano is a talented skateboarder who has no legs. His life and the way in which he has overcome this major obstacle illustrates how the human mind and consequently the human body can adapt quite well in the face of great adversity. 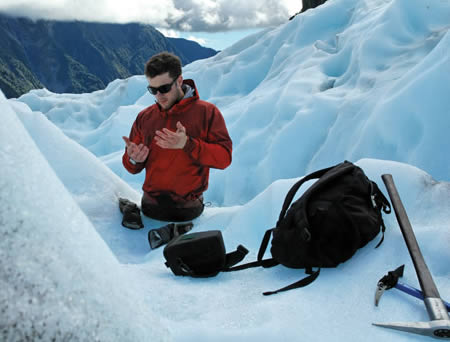 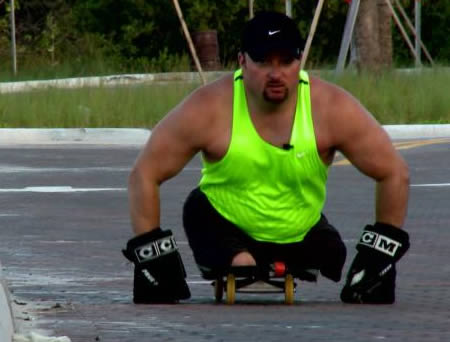 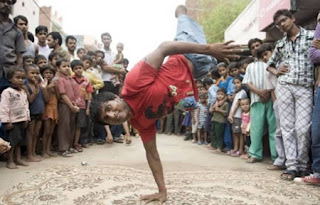 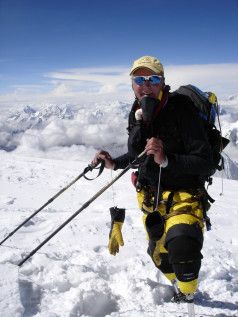 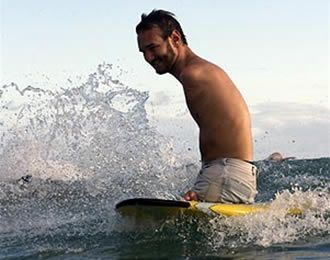 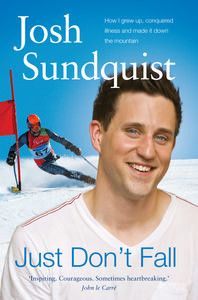 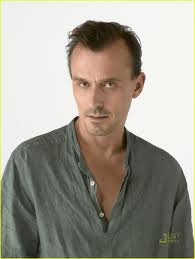